This morning, I wrote that I disaprove Bill Gates and Warren Buffett&#8217-s Giving Pledge operation, because I rather favor billionaires investing in young startups lead by visionaries. Well, just after the publication of that post, I stumbled on the &#8220-Audacious Optimism&#8221- event, which satisfies my request.

The Thiel Foundation is encouraging philanthropists to donate more money to scientific pursuits that could lead to big breakthroughs in medicine, artificial intelligence, and nanotechnology, among other fields. 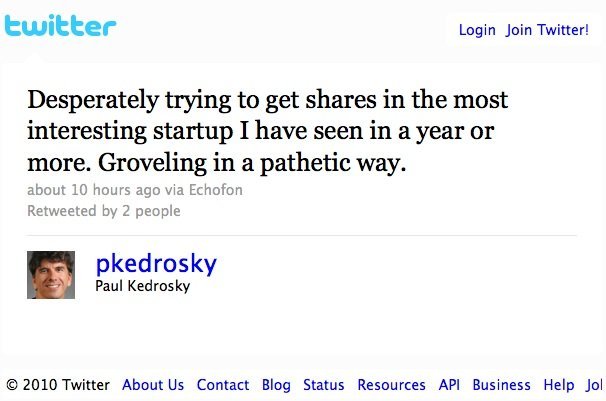 Steve Wozniak, co-founder of Apple Inc., speaks at the Haas School of Business, UC Berkeley, about entrepreneurship and his experiences during the early days of Apple (April 22, 2008).

But here&#8217-s the twist: The more you work, the luckier you become.

Peter Diamandis on risks and innovation:

Finally I’d like to address the issue of risk. In contrast to individuals who speak about reducing exposure to risk, I want to speak in favor of accepting more risk.

There is no question that there is risk involved in winning the X PRIZE, as well as risk in going to the moon or Mars or opening any portion of the space frontier. BUT, this is a risk worth taking!

As American many of us forget the debt we owe to early explorers. Tens-of- thousands of people risked their lives to open the &#8216-new world&#8217- or the American west. Thousands lost their lives and we are here today as a result of their courage.

Space is a frontier and frontiers are risky! As explorers and as Americans, we must have the right to take risks that we believe are worthwhile and significant. We owe it to ourselves and future generations. In a time when people are risking their lives in motor sports or bungee jumping, it seems a bit shallow to be concerned about the risk involved exploring space.

It is also critical that we take risk in our technology development and that we allow for failure. Without risk and without room for failure we can not have the very breakthroughs we so desperately need.

Remember those immortal words, &#8220-Failure is not an option?&#8221- If we live and work in an environment where we cannot fail, than breakthroughs may not be an option either.

I urge both this Committee and NASA to take steps which will help the American people understand that space exploration is intrinsically risky, yet a risk worth taking. Let&#8217-s make space explorers heroes once again.

I already linked to it, but you should re-read the 2008 TIME interview of BetFair&#8217-s two founders.

Awesome literature, if you are an entrepreneur.

Take 10 minutes today to read that.