Intrade has opened a market for Dominique Strauss-Kahn to be found guilty of, or plead guilty to, at least one of the charges laid against him. This market can be found under Legal &gt- D. Strauss Kahn.

This market covers only the charges covered in the complaint. Any other criminal or civil cases will not be considered when expiring this market.

The contracts will be paused if possible when a verdict is about to be announced and will be expired as soon as that decision is made public.

The end date on the contract is for indication purposes only. This date may be extended if necessary.

Any changes to the result after the contract has expired will not be taken into account &#8211- Contract Rule 1.4

Due to the nature of this prediction market contract you are obligated to read Contract Rule 1.7 (Unforeseen Circumstances) and Contract Rule 1.8 (Time Protection). Intrade may invoke these rules in its absolute discretion if deemed appropriate.

Please contact the exchange by emailing [email protected] if you have any questions regarding this contract or interpretation of these contract specific rules, related exchange news articles or exchange rules before you place an order to trade.

How do we know the Intrade price was not accurate? Well, the raid wasn’t just executed on a whim. It had been planned for quite some time. Therefore, the true likelihood must have been much higher than the four or five percent chance the market was telling us.

Many people knew of the plans, albeit they were very high ranking, sworn-to-secrecy types. Since the market did not reflect the potential success of the planned raid, either the market was inefficient or the market, in an aggregate sense, did not possess enough information to make a reasonably informed prediction. In this case, I have to believe the market participants (every last one of them) knew next to nothing about the outcome being predicted.

The Intrade market prediction was nothing more than an aggregation of guesses. This is very different from an accurate prediction (based on calibration) that turns out to be wrong.

Markets such as these have no use, whatsoever, in decision-making. The useful information was that gathered by the SEALs and other secret services, and that was the information provided to the real decision-maker, The President. I would argue that these types of markets have no place as betting markets either. There is no way to test the calibration, so we don’t know whether they are “fair” markets (unlike the accurate calibration of horse races and casino games).

In other words, stop wasting our time operating and analyzing these markets. They are never going to be useful.

At present, the UK uses the “first past the post” system to elect MPs to the House of Commons. Should the “alternative vote” system be used instead? 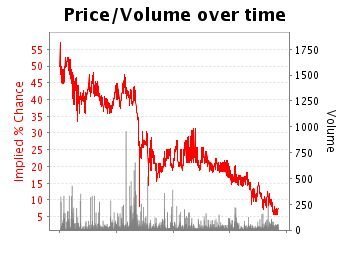 I already blogged about the big fail of the prediction markets. Here&#8217-s more from the NYT, Eddy Elfenbein, and Barry Ritholtz.

You can download a copy of the draft paper here.

I am skeptical, since the US Congress has just outlawed movie prediction markets, but I wish good luck to Chris Rabelais et al. Maybe the political scene will be different next year, who knows.

UPDATE: As you&#8217-ve understood, I was talking about CFTC-approved real-money prediction markets, here.