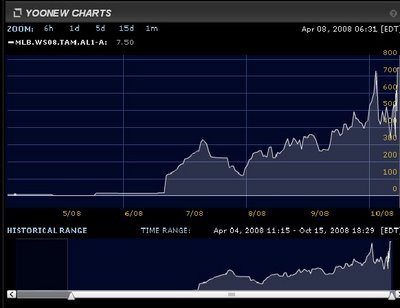 John Delaney said that that firm has been hedging on InTrade &#8212-a normal and beneficial activity on the other (larger and more liquid) financial markets.

InTrade is not liquid enough to weather (quickly enough) the impact made by the hedging activities, at this time, but will in the future, if growth continues.

Many modules are missing, but it&#8217-s good enough. Henry Blodget made an effort on data visualization &#8212-something Justin Wolfers never did.

– Another one bites the dust:

(Sorry for those who have a narrow screen and don&#8217-t see the right part of this big chart.)

According to InTrade, here are the banks that could fail next:

External Links About The Big Bailout:

– Reason magazine have collected opinions from the leading free-market economists on the Bailout issue.

There is no reason to expect the correct solution from the same people who created the crisis in the first place and who until very recently thought the economy was strong and that there was little or no chance of recession. [Mark Thornton]

This is a financial coup d&#8217-etat, with the only limitation the $700 billion balance sheet figure. [Yves Smith]

– Mike Linksvayer has some additional good links&#8230- and some strong words, too.

UPDATE: The Manhattan Institute on financial crisis and the Bailout

I am not surprised at all by the results.

The second CNBC video segment that TradeSports-InTrade CEO John Delaney does not want you to see on YouTube:

Felix Salmon has an omelette on his head, now.