Some delegates from FL or MI will be seated at the Democratic Convention.

First look at individual states for the 2008 US presidential elections 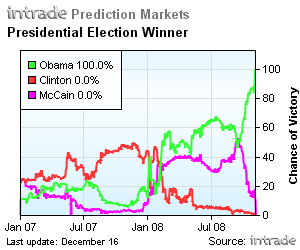 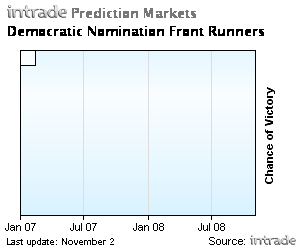 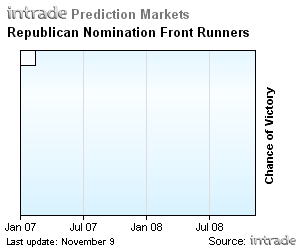 Next US President Will Be Democratic.

Next US President Will Be Republican.

Prediction markets produce dynamic, objective probabilistic predictions on the outcomes of future events by aggregating disparate pieces of information that traders bring when they agree on prices. Prediction markets are meta forecasting tools that feed on the advanced indicators (i.e., the primary sources of information). Garbage in, garbage out&#8230- Intelligence in, intelligence out&#8230-

A prediction market is a market for a contract that yields payments based on the outcome of a partially uncertain future event, such as an election. A contract pays $100 only if candidate X wins the election, and $0 otherwise. When the market price of an X contract is $60, the prediction market believes that candidate X has a 60% chance of winning the election. The price of this event derivative can be interpreted as the objective probability of the future outcome (i.e., its most statistically accurate forecast). A 60% probability means that, in a series of events each with a 60% probability, then 6 times out of 10, the favored outcome will occur- and 4 times out of 10, the unfavored outcome will occur.

Each prediction exchange organizes its own set of real-money and/or play-money markets, using either a CDA or a MSR mechanism.

– All The Midas Oracle Explainers On Prediction Markets