The betting site [*] intrade.com offered a security that would pay out $100 if the Republicans held their majority in the U.S. Senate and nothing if they lost. For weeks, it had been trading at around 70, reflecting the consensus view that there was a 70 percent chance that the Republicans would hold power. But as the results came in, the market—not the media—was first to smell the upset. 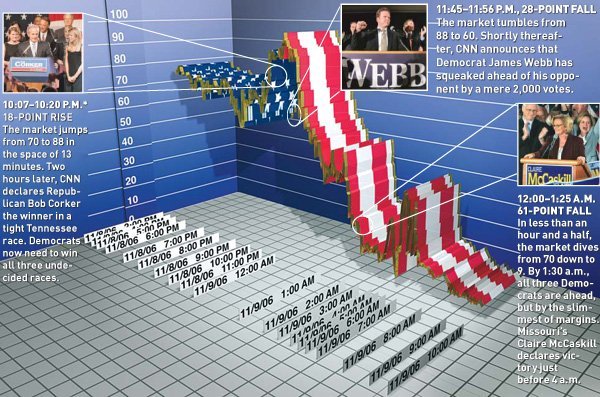 Part of a long article explaining &#8220-the science behind&#8221- the Pop Sci prediction exchange.

A prediction market [**] is like a stock exchange [***], except people trade not stocks but predictions.

And, between me and you, I don&#8217-t get why a popular magazine would get into this arcane topic. There are many other sub-topics on prediction markets that are more urgent and important than decision markets or decision-aid markets.

[&#8230-] The trouble with these markets is in getting enough people to participate. [******] It&#8217-s legally precarious to set up a decision market in the U.S. (trading these propositions looks suspiciously like Internet gambling to some—although by those standards, so does investing in pork-belly futures). [*******] Most American ventures use play money, which surprisingly enough, generates predictions as accurate as those of real-money markets. [********] These fake-money markets need to attract traders by being entertaining, not by offering the possibility of riches. It&#8217-s no wonder the U.S. market with the most trades is the Hollywood Stock Exchange. Without the lure of real money to be made off other, perhaps less-savvy market participants, it&#8217-s hard to recruit enough traders into a decision market that creates insight into serious yet perhaps more mundane issues. But it can be done. We have the crystal ball at our fingertips. All that&#8217-s left is to look into it together.

[******] Hummm&#8230- No. The problematic is how to motivate enough the speculators (the sophisticated bettors) so that they perform the information aggregation work. Prediction markets should not have as ultimate goal to transform the whole Planet Earth&#8217-s population into traders, but to milk out the traders&#8217- passion and impulse so as to create profits and accurate market-generated predictions. You do that by offering a very sophisticated prediction exchange platform, which is not yet what Pop Sci has achieved.

[********] Why not citing the best academic paper demonstrating this? Ah, it is authored by Emile Servan-Schreiber of NewsFutures, a competitor of the Hollywood Stock Exchange, which powers the Pop Sci prediction exchange. Pitiful.

The final line of the Pop Sci article:

Michael Moyer is the executive editor of Popular Science.

Flawed and biased explainer on prediction markets, in my judgment. Pitiful.

4 thoughts on “Pop Sci outputs a flawed and biased explainer on prediction markets.”