Full disclosure: I trade real money in all markets mentioned.

Both preceding and after the utterly uninformed pronouncements from the past week or so that Hillary was &#8220-the one to beat,&#8221- that she was &#8220-in a league with Tiger Woods and Roger Federer: no. 1,&#8221- the futures markets have voiced a somewhat different opinion. 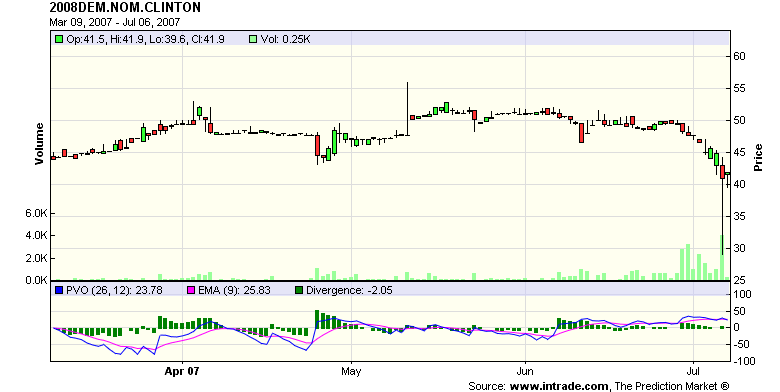 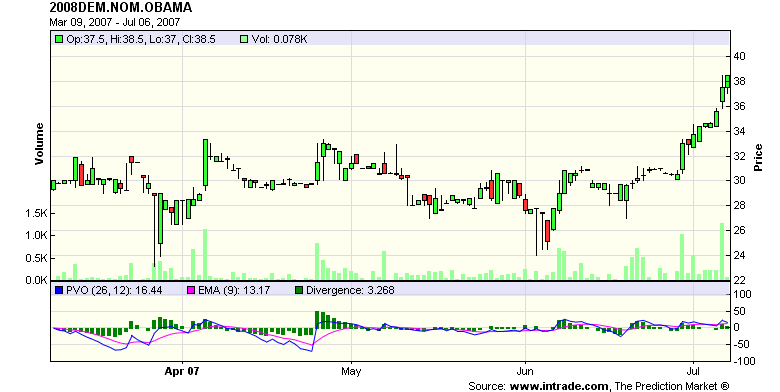 There was an unfortunate misperception that Hillary became an overwhelmingly dominant frontrunner on the betting markets, exemplified by the two articles to which I linked. The only time interval in which that was even arguably true was during Obama&#8217-s dip in early June.

Anyway, basically, Obama&#8217-s second-quarter fundraising prowess constitutes the second time in a row in which he&#8217-s demolished the Clintons at their own game. (The meaning of Q1 numbers is much less clear, because lots of politicians, such as John Edwards in 2003 and Mitt Romney in 2007, wrung their personal networks for as much as they possibly could in the first quarter. The second quarter calls for more breadth and depth in one&#8217-s donor base.)

Poll numbers do not mean too much at this point- Joe Lieberman was still winning the Democratic primary at this point in 2003, although nobody took him very seriously. Hillary Clinton has Lieberman-esque name recognition, but her campaign suffers from a yawning enthusiasm gap and a weaker, more reluctant donor network.

From this point on, Obama can expect to be taken at least a little more seriously by the decaying, but still all too relevant MSM. More positive coverage will translate into better poll numbers, which will further undermine Hillary&#8217-s campaign.

With Gore having issued something akin to a &#8220-Sherman statement&#8221- yesterday, and Edwards utterly unable to move the debate beyond the price tag of his last haircut and his own work for the Fortress hedge fund, the Democratic primary is coalescing into a Hillary-Obama slugfest.

3 thoughts on “Intrade: Obama and Clinton at near-parity”