To celebrate BetOnMarkets.co.uk, the fixed-odd financial betting operator, hitting ?200m turnover in the UK, it released 200 balloons outside St. Paul&#8217-s earlier today. Each balloon contained a ?10 free bet for punters to have a go on the website. BetOnMarkets achieved this result in the seven years since it started operating in the UK in 2000. If any of the balloons are found in America, BetOnMarkets regrets to announce that the ?10 free bet excludes US citizens due to the 2006 Unlawful Internet Gaming Enforcement Act! 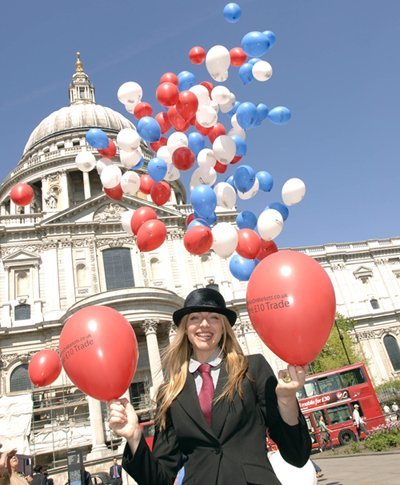 BetOnMarkets, the world’s foremost fixed odds financial betting provider operating eight websites in seven countries, has announced impressive financial results for the year ending 31 December 2006. The company’s turnover saw a 34 percent increase hitting a record $100 million while gross profit shot up by 290 percent to a total of $5.3 million. Commenting on the results, Jean-Yves Sireau, CEO of BetOnMarkets said: ‘These are excellent results, which clearly demonstrate BetOnMarkets’ superior customer offering and international appeal. We have accepted over 10 million transactions since the group was established in 2000 and we look forward to continued growth in 2007.’ BetOnMarkets fixed odds betting system, which limits customers risk to their fixed stake, has seen continued expansion with the group’s two largest websites betonmarkets.co.uk and betonmarkets.com taking between 6,000-10,000 bets per day, worth approximately ?5 million per month.

&#8211-&gt- Financial bookmakers are doing well in the Great Britain, it seems &#8212-whereas I don&#8217-t think the same could be said of the US-based, CFTC-regulated financial prediction exchange(s). Read prawf Tom Bell&#8217-s take on the prediction market petition, circa last month, for more info.